Turning Back to Epic Fantasy

by David B. Coe

Like Gail, I have written in several fantasy subgenres over the course of my career, most recently taking on contemporary urban fantasy (with my Case Files of Justis Fearsson trilogy) and historical urban fantasy (with the Thieftaker Chronicles, which I write as D.B. Jackson). I started out, though, writing alternate world, epic (or high) fantasy. Multi-book story arcs, set in created worlds, with lots of magic and castle intrigue, and with larger-than-life villains who threatened All That We Hold Dear. Fun stuff. 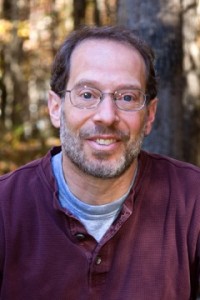 I’ve recently returned to these early works. The rights to my first several series have reverted to me, leaving me free to do with them as I please. And I have chosen to reissue what I am calling the “Author’s Edits” (think Director’s Cut) of the books. For obvious reasons, I’ve started with my first series, the LonTobyn Chronicle, which I published back in the late 1990s. These books established me commercially and critically, and won me the Crawford Fantasy Award as the best new author in fantasy. They’re as close to my heart as any books I’ve written. But they were also my first efforts and they suffered from many of the flaws one finds in first novels. Hence the Author’s Edit. I haven’t changed any of the plotting, world building, or character work. But I’ve tightened the prose and eliminated unnecessary dialog tags, adverbs, and expository passages. The books now read better than they ever have.

In reading through and editing this first series, I realized that I miss writing epic fantasy. It’s not that I’ve come to dislike urban fantasy. Far from it. I believe the Fearsson and Thieftaker books represent the best writing I’ve ever done. But I had forgotten how much fun it can be to write those huge, sprawling epics on which I cut my teeth as a writing professional.

To my mind, the biggest differences between writing urban fantasy and writing epic boil down to the related issues of point of view and plotting. Urban fantasy, as I’ve approached it in my career and experienced it as a reader, tends to be more streamlined. The cast of point of view characters is usually limited to a single protagonist, or perhaps two or three narrating characters. The plotting can be twisty and intricate, but it’s also focused. Much of urban fantasy pays homage not only to its fantasy roots, but also to noir mystery. It’s not surprising then, that some of the best books in the subgenre are lean, fast-paced, and tightly constructed. As I say, I love urban for just these reasons. 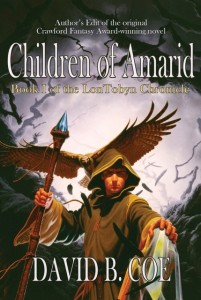 But for me, the allure of epic fantasy, both as an author and as a fan, lies in its embrace of very different attributes. My favorite epic fantasies, and all the high fantasies I’ve written, braid together many seemingly disparate storylines that coalesce as the novel and/or series progresses. By necessity, these plot threads are presented through a pantheon of point of view characters, who give the reader dfferent perspectives on the story, and bits of information that form a sort of narrative mosaic.

In some respects it’s less efficient story telling. On the other hand, when done well, epic fantasy can take on a richness and texture that make it unique among all forms of speculative fiction. I enjoy writing it because I can lead my reader through a labyrinth of plot points, hinting at key moments to come, feinting at possible paths my story might take, and telling the tale through a collection of voices, each one unique and, I hope, engaging. I can give my readers more information than any one of my characters has at his or her disposal, thus ratcheting up the tension by, for example, sending my protagonist into a trap of which my readers are aware, even though she is not.

We writers can be a fickle bunch. When I shifted from epic fantasy to urban, I did it, in part, because I was tired of writing the multi-POV, multi-plot-thread, multi-volume stories that I’d written throughout the early years of my career. I longed for that leaner voice of urban fantasy. I wanted to write stand-alone novels that more closely resembled whodunits, but with a magical twist. The Thieftaker and Fearsson books were exactly what I was after. 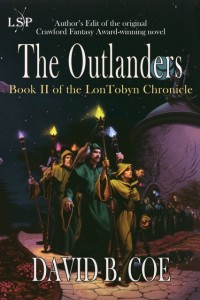 Now, I find that I’m ready to turn back. Reading and editing Children of Amarid, my very first novel, as I prepared for its re-release, I found myself transported back to those days when I was writing the book without a contract, dreaming of one day becoming a published author. I had read many of the great epic fantasists of my youth: Tolkien and Donaldson, Kurtz and Kerr, McCaffrey (yes, I know — she considered herself an author of Science Fiction; I thought of it as fantasy), LeGuin, Brooks, and Eddings. Those were the authors who attracted me to this career, and when I wrote the LonTobyn Chronicle, I tried to draw upon what I saw as the finest qualities of their work. I’m not so full of myself as to claim that I succeeded with this first effort. But they were my inspirations, and fantasy, as they defined the field, was my first love.

So, now I’m back to it. I have more of my backlist to release in coming years: my five-book Winds of the Forelands series, my Blood of the Southlands trilogy. And I’m eager to try my hand at writing new epic fantasy, blending my lifelong passion for the genre with the knowledge of craft I’ve accrued during my twenty years in the business. I don’t yet know exactly what this new project will look like. But those elements of the genre that I love — magic, of course, the more wondrous the better, as well as intrigue, action, and maybe a sprinkling of romance — will all be there, along with the rich complexity that makes reading and writing high fantasy such a joy. Stay tuned!

David B. Coe/D.B. Jackson is the award-winning author of nineteen fantasy novels. As David B. Coe, he writes The Case Files of Justis Fearsson, a contemporary urban fantasy from Baen Books. The first two books, Spell Blind and His Father’s Eyes came out in 2015. The third volume, Shadow’s Blade, has recently been released. Under the name D.B. Jackson, he writes the Thieftaker Chronicles, a historical urban fantasy from Tor Books that includes Thieftaker, Thieves’ Quarry, A Plunder of Souls, and Dead Man’s Reach.

David is also the author of the Crawford Award-winning LonTobyn Chronicle, which he is the process of reissuing, as well as the critically acclaimed Winds of the Forelands quintet and Blood of the Southlands trilogy. He wrote the novelization of Ridley Scott’s movie, Robin Hood. David’s books have been translated into a dozen languages.

He lives on the Cumberland Plateau with his wife and two daughters. They’re all smarter and prettier than he is, but they keep him around because he makes a mean vegetarian fajita. When he’s not writing he likes to hike, play guitar, and stalk the perfect image with his camera.

One Response to Turning Back to Epic Fantasy