The Rebirth of Elegant Horror

Now, for me, particularly cinematically speaking, one of the great harbingers of elegant horror’s return was actually billed as a sci-fi flick. Bet you know which one I mean: Ridley Scott’s Alien. Some may argue that The Exorcist holds the honor of beginning the rebirth, but I see that classic as being a hallowed outlier, a rebel in a rising age of schlocky living deads, shocky chainsaw massacres and scream-queening slasher nightmares that still, of course, rule a considerable kingdom of gruesome.

Is it weird, then, that I -an author often billed as a horror writer- never learned to love the likes of The Texas Chainsaw Massacre, Nightmare on Elm Street, Halloween or Saw? Well, not really, when you consider that my early influences were Edgar Allan Poe and Rod Serling. It’s true that the morés of Poe’s and Serling’s times repressed the grotesque. But I believe, even if that were not the case, Poe and Serling would have still insisted that the gore serve the story. Not the other way around.

Which brings me back to our modern times and why I feel we are enjoying a new age of elegant horror. Literarily speaking, it’s been coming for a while now. Consider Guillermo del Toro (whether in books or movies, dude kicks elegant horror ass), Thomas Harris, Anne Rice and Peter Straub. Now, don’t be snippy because I didn’t include Stephen King. I am a great admirer of Stephen King. He is legendary. But I don’t believe his work can be defined as elegant horror, even though some very elegant horror movies have been made based on his novels.

Cinematically speaking, today’s return to elegant horror occurs more often on the small screen (if you can call today’s t.v. screens small) than the great, silver one: The Walking Dead, American Horror Story, Penny Dreadful, my personal favorite Hannibal and even the Netflix yawner Hemlock Grove fits the mold. Were you a fan of Dexter? I can see that.

And it should come to no one’s surprise that many of the above mentioned are riffs off elegant horror tomes. The film industry has mined the best and brightest from literature for decades, and we have all benefited.

So. What’s my point? My point is that there is, and always has been, a large audience enthralled with the kind of horror that cuts deeper than a meat clever or a chainsaw; that probes softer, more vulnerable parts of our humanity than mere muscle tissue and organs. The old masters understood how to do that. So do the contemporary masters. And I am in absolute, chilled-to-the-bone heaven to see the literary and cinematic worlds return to their senses and re-embrace them.

Think you might be a closet elegant horror fan? Here’s some of my favorites to cut your teeth on…or deeply into your soul:

Movies: The Exorcist, Alien, The Shining, Rosemary’s Baby, Pumpkin Head (much ignored and underrated), Let the Right One In (the original Swedish flick), Let Me In (the British/American version of Let the Right One In), The Silence of the Lambs, The Sixth Sense, The Others

K.L. Nappier is the author of “The Full Wolf Moon Trilogy”, “Voyagers”, “Strange Eight” and other supernatural thrillers and dark fiction. For more information, go to www.KLNappier.com

Larry and I so excited to see Iron & Blood in stores and online! It’s our new Steampunk novel set in an alternative history Pittsburgh in 1898. Airships, clockwork zombies, Gatling guns, mad scientists, inventors, carriage chases and much, much more. You can read an excerpt here

It’s still the Hawthorn Moon blog tour, and we’ve had guest blogs in a lot of places. In case you missed them, here’s where to find the scoop (and there will be more to come!):

Interview with I Smell Sheep blog
We spill secrets to RisingShadow
A look at the Pittsburgh of Iron & Blood for Daily Steampunk
The Victorians That Weren’t on GeekNative
Why Mary Sue Must Die! For SciFiChick
Zebra Eclipse chats us up on the future of publishing
Darin Kennedy got us talking about The Charleston of Deadly Curiosities
Why are there so few older characters in fantasy?
Larry and I talk co-authoring on SitWriteBleed
WeGeekGirls wanted to know about Kickstarter publishing
FantasyBookCritic asked about literary collaboration
Magical Words found out 5 things to Remember for your Blog Tour
SFSignal asked what it’s like co-writing with your spouse

In case you missed it with the holiday, Season 2 of Deadly Curiosities Adventures short stories kicked off with Shadow Garden! Haunted gardens and old family curses make for an uber-creepy good time! Order here 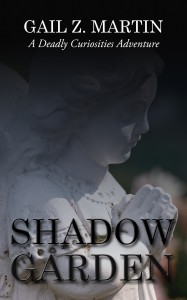 Grab your copy of Iron & Blood at the Congregate launch party this weekend! Here’s our schedule—please make sure you come by and say hi!

And it’s not just Iron & Blood’s launch week! You can grab hot new books from John Hartness, Lou Anders, Chris Kennedy, Clay and Susan Griffith and more! The Congregate launch party will have new books from John, Chris, Larry and me, Darin Kennedy, and Matthew Saunders! No excuse for not grabbing a fist-full of beach/vacation reading! 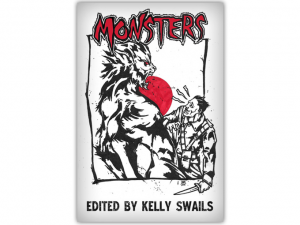 I’m involved in a couple of Kickstarters that are all active. Monsters! from Silence in the Library is all about monster stories (imagine that!) and the campaign is in its last hours. If we hit the $10K stretch goal, I get to write a story for it. Here’s the link to become a backer.

The Side of Good/The Side of Evil is a flipbook of heroes and villains. I’m writing a villain story, so please take a look!

Can you imagine a superhero nursing home for crime-fighters who are past their prime? Elysian Springs: Adventures from the Superhero Nursing Home can! I’ll have a story in it, so check it out here. 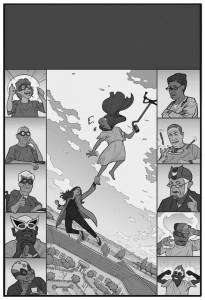 Next up after Congregate is Confluence in Pittsburgh, with another Iron & Blood book launch party and a signing at the Barnes & Noble in Cranberry, PA. Come by and say hello!