1.  What is the title of your newest book or short story?  What’s it about?  Where can readers find it?

My latest release from Double Dragon Publishing is Sinners’ Opera, a paranormal romance about obsession.  Morgan D’Arcy is an English lord, a concert pianist…and a vampire.  He has everything except the treasure he most wants…Isabeau.

2. What’s your favorite part of writing a new book or story?

The white-hot fever of creation.  I allow the characters to tell me the story and let the scenes play like a movie in my head.  I love the first draft.

The sagging middle!  And edits.

I think Anne Rice’s Lestat was the main inspiration for Sinner’s Opera.  I wanted to try my hand at creating a creature as mesmerizing as Lestat, but Morgan took on a life of his own.  Other than being blond, I really think there is little similarity between the two characters.

5. Was there a book you read in your childhood or teen years that changed your world? Tell us which book and how it made a difference for you.

I read an obscure book called The Fire and the Hammer.  Said to say that I don’t remember the author’s name.  The book was about the Doan brothers, a group of Quaker outlaws.  The heroine follows the hero from Bucks County, Pennsylvania into the Carolinas.   She lives with and helps his family, but she never gets her man.  At that early age, I hadn’t even begun to think about soul mates, but the book touched me deeply.  I remember wishing breathlessly that she would finally get to be with Mailin.  I even bought a book on the Doans, who were also notorious British spies during the American Revolution.  How did it change my life?  The Fire and the Hammer inspired me to write. 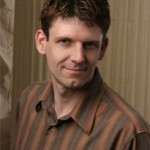 Patricia Bray and I enjoyed editing our previous two anthologies (AFTER HOURS: TALES FROM THE UR-BAR and THE MODERN FAE’S GUIDE TO SURVIVING HUMANITY) so much that we decided we wanted to do more!  In order to make that happen, I created a small press called Zombies Need Brains, which initially will produce anthologies—perhaps two a year—funded by Kickstarters.  Our first anthology is going to be called CLOCKWORK UNIVERSE: STEAMPUNK vs. ALIENS.  When aliens reach Earth, they encounter the clockwork mechanisms and Victorian sensibilities of a full-blown steampunk civilization. Inspired by the classic science fiction adventure tales of the nineteenth century, leading fantasy and science fiction authors will bring us tales of first contact with a twist, as steam power meets laser cannons . . . and dirigibles face off against flying saucers.   It will include stories by Bradley P. Beaulieu, Caitlin Kittredge, Gini Koch, Scott Lynch, Gail Z. Martin, Seanan McGuire, and Ian Tregillis.  The Kickstarter for it is currently running at the site and will end on August 16th, 2013; just swing on by www.kickstarter.com and search for “Clockwork Universe” and it should pop right up.  Check it out and fund us if you can!

2. What’s your favorite part of writing a new book or story?  What do you like the least?

Well, for this project I’m editing short stories, not writing them, so I’ll focus on that aspect.  What I love about editing anthologies is that there is such a variety of stories that can arise from even one rather particular theme—different in tone, plot, atmosphere, direction, etc.  Reading all of the stories submitted, filtering through them, finding those gems, is both exciting and thrilling.  Each story is a little world of its own, and even if all of the stories are connected in some way—be it a magical bar that travels through time, fae creatures surviving in our own world, or steampunk humans facing off against an alien invasion—each gives me a glimpse inside a particular author’s mind.  I’m always surprised by what I find there.  Probably the worst part of the experience of putting together an anthology, though, is that I invariable have to reject some of those stories.  Not because they aren’t “good enough” necessarily, but because there is only room for so many stories in one book.  This is especially hard when most of the submissions are being made by friends.  (Up to this point, the anthologies have been invite-only, but I hope to do anthologies with open submissions in the future.)  Having to write a letter to someone you’ve had drinks with and partied with at a con (and who may even be a New York Times bestseller) was extremely difficult.  I’d like to take all of the good stories, but crafting an anthology that’s balanced in tone and style means you have to do some rejecting at some point.

The theme for CLOCKWORK UNIVERSE—basically steampunk humans up against an alien invasion—was Patricia Bray’s idea initially, formed when we both went to see the Daniel Craig movie “Cowboys and Aliens.”  We were hoping that the anthology would do so well that a movie would be made based on it and we’d be able to meet Daniel Craig.  (That’s the ultimate goal of this anthology.  *grin*)  In any case, I hadn’t seen anything on the market quite like it, and so when I was looking through our list of potential anthology ideas (we have a long list), I thought this one had the most OOMPH to it, in terms of catching hold of readers’ imaginations and keeping hold long enough to convince them to fund the Kickstarter project.  Also, from a writer’s perspective, when I consider steampunk vs aliens, my brain fairly explodes with possibilities, so I knew it would inspire a ton of writers as well.

Readers can find me (Joshua Palmatier) at www.joshuapalmatier.com and www.benjamintate.com (Benjamin Tate is my pseudonym).  I’m also on Facebook under Joshua B Palmatier, on Twitter at @bentateauthor, and on Goodreads under Joshua Palmatier.  Feel free to friend or follow me at any of those.  The small press Zombies Need Brains can be found at www.zombiesneedbrains.com, has a page on Facebook (like it!), and is on Twitter at @ZNBLLC.  Watch there for current and upcoming projects.  The Kickstarter project for CLOCKWORK UNIVERSE: STEAMPUNK vs ALIENS can be found on www.kickstarter.com of course.

The best advice I can give an aspiring writer is the advice I got from Kate Elliott when I was an aspiring writer:  be persistent.  You have to sit down and write, of course, but after that you have to send that short story or novel out there.  And you have to keep sending it out there, even if you are only accumulating rejections for it.  And while it’s out there, you have to sit back down in that chair and write something different and when it’s ready, send it out.  You can’t give up and you can’t let the rejections (because there will be plenty of rejections) keep you from writing and sending things out.  It took me 10 years, four novels, and uncountable rejections before a publisher said, “Yes.  We want this.”  The reason that happened was because I was persistent and never gave up.

Click here to listen to an excerpt of An Alewife In Kish.