As The World Burns. Shadow and Flame in Stores and Online Now!

Shadow and Flame, the fourth and final Ascendant Kingdoms novel, is now in stores and online! Not only that, but Orbit and I have some killer special deals with special low launch prices and great extras! 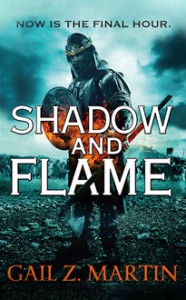 Blaine McFadden and his allies have brought magic back under mortal command and begun to restore order to the beleaguered kingdom of Donderath. Now, new perils and old enemies gather for a final reckoning. Foreign invaders, a legendary dark mage and vengeful immortals fight Blaine’s battered forces for control of the continent, and Blaine’s weary army is the only thing standing between a kingdom struggling to rise from the ashes and a descent into fury and darkness.

So here’s what’s REALLY cool!  Right now, the paperback copy of Shadow and Flame is just $10.24 (save $5.75) on Amazon ! AND Orbit has done a price drop on ALL of the Ascendant Kingdoms books for a limited time—Ice Forged, Reign of Ash and War of Shadows are just $4.99 on Kindle (save $5 on each)! Great for catching up if you got behind, and perfect for binge-reading your way through the series. Grab them quick! 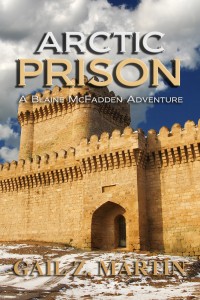 And to sweeten the deal a little more, if you buy Shadow and Flame (ebook or paper) before 3/31, you get Arctic Prison (a Blaine McFadden prequel novella) free! (That’s a $2.99 value!) Need to catch up on the series? Buy 2 or more Ascendant Kingdoms novels (any format) by 3/31, and get King’s Convicts (three Blaine McFadden prequel novellas) free! (That’s a $9.99 value!) Details here: https://conta.cc/2293EXk

Here’s what they’re saying about Shadow and Flame!

“The perfect conclusion to a truly epic tale.” — Michael J. Sullivan, author of the Riyria novels.

“Gail Z. Martin is the one of the finest storytellers writing today. Her fascinating characters and mastery of atmospherics gives readers stories that have to be savored. Her characters display the sort of quick wit and heart that make them a joy to follow through their adventures.”
—Michael A. Stackpole, New York Times Bestselling author of I, Jedi and Rogue Squadron

“A flawless finale that does not disappoint.” — RT Book Reviews 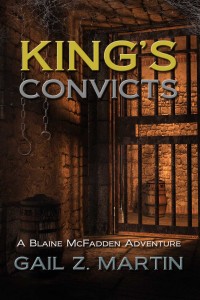 And Shadow and Flame made io9 and Gizmodo’s “Most Talked About Books for March” list!

But as they say on QVC, wait—there’s more! Join my Chronicles newsletter in March and enter for a chance to win a free copy of Arctic Prison (2 lucky winners!).

Join me on March 23 for an Ask Me Anything (AMA) on Reddit/Fantasy! I’ll be posting around noon, and returning later in the day to answer your questions. Want to know something about one of my books or characters, what’s coming up next, or just have questions about writing and publishing? Ask Me Anything! (If you miss the date, stop by anyhow and check out the Q&A or ask a question—I’ll be dropping by for a while to pick up latecomers!)

Shadow and Flame isn’t the only thing that’s new—we’ve got a new Storm and Fury Adventure for Steampunk fans. Airship Down takes the Department of Supernatural Investigation on a wild ride in search of mysterious orbs that might be sabotaging New Pittsburgh’s factories. It’s jam-packed with adventure and explosions! 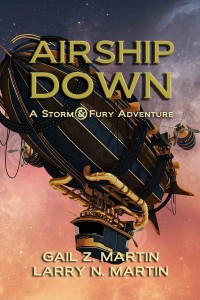 Want another chance to win a prize? Answer my March reader survey question!

If you like bookmarks and book swag, you can get a whole envelope of cool free stuff for my books! Free swag! Send SASE (w 2 stamps on return envelope) to PO Box 241721 Milwaukee WI 53224 Must say ‘Attn: Gail Martin’ on outside envelope

If you were part of my Shadow Alliance street team, you’d get sneak-preview snippets from Work In Progress, exclusive t-shirts, and other special stuff. It’s free to join. Help spread the word about my books and have access to cool contests, giveaways and more!

Want a signed copy of Shadow and Flame? I’ve got two signings coming up! Mar. 26  at Park Road Books, Charlotte NC from 2-4 and Apr. 2 at Barnes & Noble, South Park Charlotte, NC from 1-3! Come by and say hello!