An excerpt from Making a Difference

an excerpt from
Making a Difference
by Robert Greenberger

(from The Side of Good) 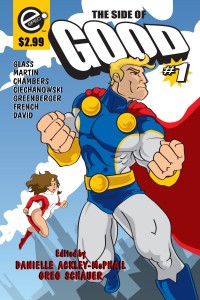 Gravel and grit forced their way into his mouth as he felt his boots drag along the street, kicking up the debris as the car picked up speed. He held on tight to the front bumper, willing his hips and legs to swivel into action, letting him scale up to the hood. His mind fought to control multiple inputs, starting with the foul taste in his mouth, the ache in his calves, and the strain in his biceps.

Willing his body to behave, he once more moved into action and somehow wound up exactly where he wanted to be: riding a speeding car, weaving in and out of light Manhattan traffic at three in the morning, with police sirens beginning to fill the air. His gloved hands gripped the sides of the tapered hood and he stared through the windshield at the driver, a greasy-haired, pock-mocked kid of maybe twenty. Normally, he wouldn’t have bothered with a simple car theft except for the other occupant in the vehicle—a screaming infant, safely buckled in the car seat in the rear.

The driver’s eyes bulged and the hero saw his mouth work and finally form the name: “Crusader”.

He hated the name but it had been pinned on him on the very first night he sought to make a difference. When he decided to don the black-and-gold outfit, he had been mulling over names but after stopping a riot in the wake of an unfavorable legal decision, a reporter quipped, “Hey, caped crusader, where’s your cape?” And, that was all it took, suddenly he was the Crusader.

There were worse names, he supposed, and he’d grown accustomed to it, but he’d much rather have had a say in his alter ego’s name.

A sharp swerve to the right shook him from his reverie and he nearly lost his grip on the polished metal surface. With a severe gesture, he made it clear he wanted the panicky driver to pull over and surrender.

Rather than obeying the command, the driver braked hard and came to a sudden stop, the momentum dislodging the hero. Crusader rolled to the street, taking the brunt of the impact on his right shoulder, but the sound of the door opening, sneakers hitting the pavement, and the wail of the frightened infant shocked him into action. With an effort he regained his footing, checked to make certain the infant was still in the car, and took off after the thief, certain the impending arrival of the police would mean the kid would be looked after. The scumbag who stole the car, though, needed some justice. And the way the Crusader felt right then, it would be rough justice.

Harmony looked up in alarm when the Crusader appeared in the doorway to her bedroom. He tended to call ahead or at least knock to alert her of his arrival. Instead, given the late hour, the costumed figure slipped a key from a belt compartment and let himself in, the sound waking her.

“Its 4:30 in the mor…” her complaint trailed off when she saw him somewhat stagger to the edge of the bed where he heavily let himself down. “My god, you look terrible.”

“Feel worse,” he said in a hoarse voice. She turned on the night-table lamp and in the illumination saw the black streaks from his most recent activity. His mouth was bruised and swollen and even the skin was raw, trickling blood, adding a new color to the gold piping on his outfit. She noted that spots were worn through the costume and his boots were scuffed. The stylish outfit was one of the first things she focused on when they initially met. It was thick leather, providing him with some protection, creased and crinkled here and there but being mostly black you needed a strong light to notice. The helmet and faceplate cowl had a gold design that led to piping down both sleeves, disappearing under tight gloves. It was far less garish than some of the outfits other heroes appeared in, especially the women who clearly were using their cleavage to distract criminals from their fists.

“What happened?” She rose and kneeled beside him, totally unconscious that she was wearing her oversized Crusader night shirt, his grinning, cowled face looming large from shoulders to hips.

He began to speak of the evening’s activity but she placed two fingers on his lips, silencing him as she headed into the bathroom and came back with all the usual first-aid supplies. By then, he had peeled out of the leather and Kevlar-fitted jacket, exposing the various older yellow and fresh black bruises that created a pop art image on his body. She deftly applied antiseptic cream and bandages. His breathing slowed and resumed a regular rhythm.

“I saved a baby, so yeah,” he told her, which caught her attention. Children always do that to heroes and civilians alike, it must be hardwired into humanity, Mike Kinnard thought. Finally loosening his cowl and peeling it away, his brown eyes met hers and they silently communed for a minute.

“You’re a mess,” she said, breaking the silence which had been growing uncomfortable. “You never used to finish the night like this. You must be getting sloppy or…”

“…or old,” he finished for her. This had recently become the centerpiece of their conversations when it came to his colorful alter ego.

She nodded, closing up the first aid kit. “How much longer do you think you can keep this up?” she asked, the anger clear in her tone.

This was far from the first time she raised the question but tonight, this morning, was the first time he actually considered a real response. He ached. Seriously ached and not for the first time this year, he realized. He was not healing as quickly as he used to.

“There’s still work to be done,” he began before she could cut him off. “As long as I can make a difference.”

“That’s a pat, bullshit answer. You’re closing in on forty and are still trying to act like someone half your age. It’s no longer safe. You go out, beat the shit out of the bad guys, and come back here to be patched up. You make time for me as convenient, but even then you’d have to be inside me before you’d consider staying, rather than answer a cry for help.”

She pulled a stray lock of hair away from her eyes, tucking it behind her ear. “Fair? Fair is us being together, making a life for ourselves, actually planning more than a few hours out. I fell for you, Mike, not the Crusader.”

“I am the Crusader,” Mike Kinnard told her, some heat of his own in the words. “You knew that from the moment I yanked the rapist off you.” That had been four years ago, when he could still patrol the streets for hours, bust some heads, and go to work without getting tired. He felt strong and vital then; in love, real love, for the first time in his life. Mike could not now imagine his life without Harmony St. James, but she was challenging that idyllic vision and he was not in the mood to consider it. Letting a deep breath out slowly through his nose, Kinnard kept his mouth shut, not daring to let this escalate into something ugly. He was weary and sore and did not need a fight with his lover to finish off a tough night.

“Yeah, I knew you as the Crusader first,” Harmony went on, clearly not reading his mind or his body language. “But I came to love Mike Kinnard and you’re making that very hard right now. Before you, I wasn’t sure I’d ever find someone I could imagine growing old with, but then you swooped in and became my personal hero. But for us to grow old together, you need to stay alive and, you know, healthy.”

He winced at that, much as he winced at the aching muscles that screamed for Ben Gay or a whirlpool. His local gym was a 24-hour place and he wanted to go there before he had to make an appearance at Count on Kinnard, his private accounting company.

“I can’t do this without you,” he began. When she shot him a look, he let the sentence die mercifully.

“Do you want us to stay together? Get married, settle down, skip the picket fence and kids, but experience things as a couple? Answer yes and that will tell you what you need to do. Answer no then you’ve set the timer on our relationship starting tonight.”

He didn’t answer her and he didn’t believe she truly expected an answer at this late hour. She deserved one and he wanted to say the former but knew full well he was not done fighting for his city. The Blockade, Doctor Bizarre, Lightspeed, and the other heroes were still going strong and together, they were keeping Manhattan from becoming more dangerous. It felt like he’d be betraying them but then again, they had their powers to protect them. He was just an extraordinarily gifted athlete with an above-average intellect. Right now, though, he was not feeling particularly smart.

“Mike…you have to slow down. Take some nights off. Make some time for us. I don’t want to make an ultimatum, but we’re getting really close to having that ‘me or the mask’ conversation. The one you told me you never wanted us to get to.”

That conversation started about a year back, after he fought to stem a gang war while still wearing a splint, a trophy from battling the Gentleman. It was then he began to notice the wear and tear on his body and the impending onset of serious middle age. He always joked forty was when the warranty would end and his body would fall apart. What he didn’t realize at the time was that he wasn’t being sardonic but prophetic.