An excerpt from Send in the Clones

An excerpt from Send in the Clones
A tale of the Super City Police Department by Keith R.A. DeCandido
(From The Side of Evil) 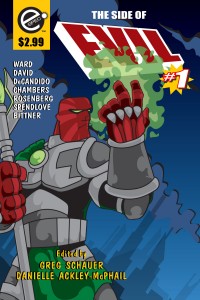 “Who’s in the interrogation room?”

Detective Kristin Milewski, who simply had not had enough coffee yet, stared intently at Officer M.C. Cunningham as she asked the question.

For her part, Cunningham looked very reluctant to answer. “I think it’s the Clone Master.”

“Well, he looks just like him, but he’s dressed up in that silly white outfit that all his henchmen wear.”

“And he just showed up?”

Cunningham nodded. “Came in, went straight to Sarge’s desk, wearing the whole outfit, saying he had to talk to a detective about the Clone Master. Then he took off the mask, and it was the Clone Master. Sarge had me take him up to Interrogation 2, and—well, you two are the only ones here.”

Milewski turned to face her partner, Detective Jorge Alvarado, who held up both hands. “Whatcha lookin’ at me for? I don’t even remember which one the Clone Master is.” Alvarado recently moved to Super City from Baltimore, and he still hadn’t gotten all the superheroes and supervillains straight in his head.

Though he should have recalled this one, as he was the scourge of the homicide squad. “Clone Master’s the one who keeps dying and then coming back. He’s probably the most reckless of the costumes out there, and he’s always getting himself knocked off. Every time that happens, one of us has to perform a death investigation, because the annotated code says that every time a body falls in Super City, the SCPD must perform an investigation. Which, for the Clone Master, is a huge waste of time, because somehow he always comes back.” She turned back to Cunningham. “And he’s in there now?”

“Disguised as one of his henchmen, yeah. I don’t get it, either, but he said he wanted a detective, so…” The uniformed officer shrugged.

Milewski stared at Alvarado, then stared at Cunningham, then declared, “I need more coffee.”

Once she’d poured more of the squadroom sludge into the mug her mother gave her when she made detective, she led Alvarado into the video room. The interrogation rooms all had cameras that fed to monitors here.

In her years on the job, Milewski had never actually encountered the Clone Master in person. The last two times he died and there was the usual abortive investigation, Fischer and Billinghurst had handled it. Both instances were right after she got promoted to homicide from vice. She had seen his face a few times, though, in news reports, and once in the morgue when the M.E. was working on one of his clones.

The person she saw on the monitor for Interrogation 2 matched her memory of that face: large nose, weak chin, beady eyes, and tiny ears. He was drumming his fingers on the battered metal table in the center of the room, and rocking back and forth in the metal chair. That seat was uneven and squeaky and uncomfortable, all of which was quite deliberate, since the people who sat there were intended to be made as uncomfortable as possible.

The one difference was that this one didn’t have a right eyebrow.

Milewski nodded. “And he’s wearing the same outfit his thugs wear. All the guys who help him on his jobs wear that froofy all-white thing that makes them look like low-rent Jedi, plus hoods to hide their faces.”

“Prob’ly, yeah.” Milewski gulped down the rest of her coffee, which burned her throat a bit. “Let’s dig out the casefiles on the last couple Clone Master deaths, and then we’ll see what he’s got to say.”

They went to the file cabinets and retrieved the files in question, and then went into the interrogation room. The Clone Master stopped drumming his fingers and sat up straight. “Finally!”

“I’m Detective Milewski, this is Detective Alvarado. You must be the Clone Master.”

Milewski sat down across from him, placing the two folders in front of her, while Alvarado chose instead to lean against the far wall. “So what do we call you. ‘Mr. 78’? Or can we be casual and call you ‘Clone’?”

“I wish I could answer, but I’m having trouble keeping track of who I am.”

“Okay. Well, you came to us, so why don’t you tell Detective Alvarado and I what it is you want to say?”

He took a very deep breath. “I want to enumerate all the crimes committed by all the various versions of Markos Balidemaj since 2007.”

Alvarado asked, “Is that when the Clone Master first showed up?”

“Of course,” the clone said as if it was the stupidest question ever.

“He’s new,” Milewski said quickly. “I remember when he—or you, whatever—first showed up. You took on Old Glory and got your ass kicked, but you got away. Two weeks later, the Bruiser fought you and you were killed. Everyone figured that was the end of it, and nobody understood why you were called the Clone Master.”

“And then another Clone Master arrived to do battle with the Superior Six.”

“When you also died.”