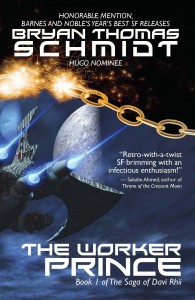 Q:  Why don’t you tell us about your novel?

Bryan Thomas Schmidt: The Worker Prince is the story of Moses with a Star Wars feel. Two groups of colonists, enemies on Earth, wind up by a twist of fate as neighbors in a far galaxy and one enslaves the other. Years later, the prince of the Boralians finds out he was secretly adopted from slaves and is a Vertullian. As he begins to discover what that means, it puts him at odds with friends and family, especially his Uncle Xalivar who leads the Boralian Alliance. Then a tragic accident sends him on the run. And he has to decide who he is and where his loyalties lie. The decisions he makes could change the lives of everyone he knows forever. It’s full of action, political scheming, family drama, a little romance, friendship, rivalries and alien races.

Q: Is it true you came up with the story when you were a teenager?

BTS: Yeah, I spent a lot of time dreaming and imagining stories and ideas in my teens, and I had a dream of writing for television and film. I came up with the idea originally as a TV miniseries and did a lot of story planning but those notes have disappeared. The only things that remained really were the idea of an epic Moses retelling and Lord Xalivar, the name of the antagonist, and Sol, the name of Davi Rhii’s father. Beyond that, when I finally sat down to write it in 2009, I just started from scratch.

Q: This is a rerelease called the Author’s Definitive Edition. The book originally released in 2011 by a micropress. What led to the new release?

BTS: Well, when it came out, the book got some great praise and reviews but the press was a micropress and focused toward a smaller market segment. They were also a Christian press, so I think that may have limited the audience. I always intended the book to be for general market, and since the press fell apart and I wanted to finish the series, I decided to go back and revise the book after finishing the final novel in the trilogy, bring the writing style up to date with my present skills, fix some of the issues critics had pointed out, create better unity to the trilogy overall, and revise it to be sure it was the best fit for general market. It remains appropriate for all ages but it is not a Christian book and was never intended to be one, so I downplayed some religious aspects a lot more and expanded some worldbuilding in ways I hope will make it more appealing. Kevin J. Anderson gave me a chance to publish it with WordFire Press, so I jumped at it.

JB:  The Worker Prince is the first book in a trilogy.  Do you have a schedule for the other 2 books?

BTS: Book 2, The Returning, is being polished and updated as well and will likely show up in Spring 2016. Book 3, The Exodus, is tentatively scheduled for next Summer.

Q:  Who were your favorite authors when you were growing up?

Q: The Worker Prince has been compared to Star Wars. Was that a big influence?

BTS: In fact, my goal was to capture the feel of the original Star Wars¸ and according to reviews, I seem to have succeeded. But I also give nods to other influences throughout via snippets of dialogue, plot elements, etc. such as Christopher Reeve’s Superman, the original Battlestar Galactica, Star Trek and more. My goal was to tell the Moses story as a space opera but without the ten commandments, parting of the Red Sea, and other particularly religious elements. The story is just such a great one and I felt would lend itself well to space opera.

Q: You have come to be known more as an editor than an author, I know. How do you think of Bryan Thomas Schmidt?

BTS: I’m both and I have a passion for both, but my first love remains writing and I hope somehow I can have some success at both, maybe even equally. This is a story I have been passionate about for a long time and have spent the last seven years writing, on and off, and 30 years dreaming about. So there is a great satisfaction in finally getting it out there, and I was a bit disappointed that while the original release sold 1500 copies in six months, book two’s launch got delayed and confused and it never really took off. This is my chance to share this story with the world, and to perhaps gain a little respect as a writer not just an editor, so fingers crossed. I’d love to be writing as much as I am editing.

Q:  Do you have a preference between science fiction and fantasy?

BTS: Well, space opera is my first love, but epic fantasy is a close second. But science fiction was what started it for me.

Q: How has your editing work influenced your writing?

BTS: Well, you know, I had not read The Worker Prince for over four years when I went back to edit it so I really had fresh eyes. I had read one scene I use a lot in readings but not the rest more than skimming. It was really a lot like editing a different author, not just from objectivity but from the fact my craft has grown so much. I have written two sequels, two fantasy novels, two other novels and dozens of short stories since I wrote this book, not to mention editing novels and anthologies, so I came back to it with an editor’s perspective. I fixed a lot of first novelist errors and issues, and I was able to also clarify things that needed strengthening, add things that had been called out as missing, and add things I now knew from writing two more books which will add more unity overall to the trilogy, and I can honestly say I couldn’t have done that three years ago, so I think editing as helped me a lot.

Q: You’ve edited some of your favorite writers like Silverberg, Resnick, etc. and you also edited The Martian, which of course is a big bestselling book and smash hit movie. What is that like and how did it come about?

BTS: Networking has made my career. Jennifer Brozek, my co-editor on Shattered Shields, was childhood friends with Andy Weir and he came to her about the novel but she felt they were too close to risk working together and recommended me. So I worked with Andy on it in 2013 and six months or so later heard he’d sold it to Crown and had a movie deal with Ridley Scott. Andy has been sending me business by recommending me, so I have started talking about it. It was the first hard science fiction I edited and it was fun. He is a nice guy and easy to work with. As for Resnick, Silverberg, et al, I just asked. Resnick I met at World Fantasy in 2010 and had corresponded with a bit first. We both have a mutual interest in African culture and I had seen his many African influenced short stories. We hit it off and he took me under his wing. To a degree, Silverberg has done the same after I bought a story from him for my short-lived magazine gig, Blue Shift and my Kickstarter anthology Beyond The Sun, and since then we have started having annual meals every World Con and corresponding. Others came along much the same with me asking and them agreeing and I try and make it a fun experience, so they fortunately keep coming back.

Q: Your latest anthology Mission: Tomorrow released two days after The Worker Prince from Baen and has been getting good reviews. It’s core science fiction, hard science fiction, right? Stories similar to The Martian in some ways?

BTS: Correct. In fact, I tried to get Andy to write a story for it but he was just too busy at the time. The concept was with NASA having been defunded a bit and space exploration downgraded in priority with both the public and government, what will space travel look like in the near future? Private? Corporate? Etc. And so authors wrote various takes on it, some humorous, some tragic, all thoughtful, and I got to work with an incredibly great group. I am thrilled it is being well received. My hope is to do one core SF anthology each year. I missed 2014 but we have Galactic Games coming in 2016, and I am shopping ideas for 2017.

Q: Thanks for making time to sit down with us. To close, if people haven’t read The Worker Prince, why should they give it a shot?

BTS: Well, it did make Barnes and Noble’s Year’s Best Science Fiction in 2011, Honorable Mention, and that was compiled by one of the top speculative fiction critics in the field, Paul Goat Allen. Paul thought it was a blast and retro in feel without being dated. Jonathan Maberry and Robin Wayne Bailey felt the same when they blurbed the current edition. Maberry said: “The Worker Prince breathes dynamic new life into the space opera genre. Rich characters, wild action, and devious plotlines collide in a thoroughly entertaining book!” and Robin described it as  “A brisk science fiction novel full of rich characters and settings, it embodies ‘sense of wonder’ in the best traditions of classic science fiction. Well worth your time!” Those are two New York Times Bestselling authors, far less biased than I am. Those are three reasons. Beyond that, if you like fun, escapist science fiction, then this book is for you. But it also touches a bit on ideological discrimination and themes of bigotry in some very relevant ways as well, without being heavy handed or preachy (so I hope and am told), so I think it also has relevance for those looking for more substantial fare as well. Also, some fun aliens, planets, and good humorous banter as well with lots of action. You won’t be bored, for sure.