Looking Over the Brink 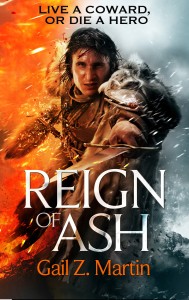 What is it about National Enquirer headlines, traffic accidents and the end of the world that make us squeamish about looking and unable to look away at the same time?

It’s kind of like being at the top of one of those really high observation decks and double-daring yourself to go to the edge and look over, while fighting that evil little voice in the back of your mind that keeps yelling “jump, jump, jump!”  You don’t want to look, but you can’t help yourself.

For me, that’s the appeal in writing about the end of the world.  You don’t want to be there, but you can’t stop rubbernecking.

Reign of Ash is the second novel in my Ascendant Kingdoms Saga series, due out from Orbit Books in April, 2014.  It’s the sequel to Ice Forged, in which I took a lovely medieval world and blew it to smithereens all for the sake of adventure.  Well, to be perfectly honest, conniving kings, territory-grabbing neighboring kingdoms and mages who became weapons of mass (magical) destruction really did the blowing up part.  I just came along afterwards to chronicle what happened next.

While I’m not usually big on modern post-apocalyptic stories, the idea of writing a medieval end-and-rebuilding story fascinates me.  Perhaps it’s because the real Middle Ages had its share of end-of-the-world moments.  I’m sure that’s what the fall of the Roman Empire looked like to the people living in the aftermath, as well as the time of the Black Plague, various and sundry dynastic wars, the Inquisition and periodic invasion by warlike neighboring kingdoms.

Reign of Ash follows up where Ice Forged leaves off.  The kingdom of Donderath has been leveled by a combination of war and a catastrophic doomsday magical strike that not only brought down devastation on both warring kingdoms, but unexpectedly knocked out the magic on which the culture depended for its survival.  Imagine depending on magic the way we rely on the power grid, and you get an idea of what’s at stake. What if the only person who might be able to restore the magic was a disgraced lord serving a prison sentence in an arctic penal colony?  What if some powerful lords saw the opportunity to gain power by maintaining chaos??

Those “what if” questions lay behind the creation of the Ascendant Kingdoms books.  One of the intriguing questions for the survivors of the Cataclysm is what does the future look like, when just rebuilding what you had in the past won’t work?  When you can’t get back what you’ve lost, where do you go from here?  It’s a meaty question, and one that my characters will be exploring for several more books!