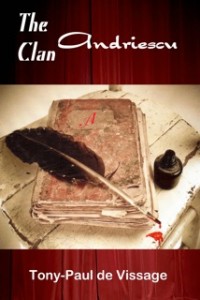 Whenever I begin a blog, I feel as if I’m at an AA or some other rehabilitative meeting, that I should stand up and say, “Bon Jour, everyone…my name is Tony-Paul and I like vampires.  Not only like them but I write about them also.”  At this point, everyone would mutter, “Hello Tony-Paul,” but…instead of launching into a story of my addictions and failures, we’d proceed to delving into the nosferatu psyche and how our literary efforts can make them more exciting and interesting because…believe it or not…we of the vampire-author persuasion don’t want to be cured!

Nope…sorry…unrepentant and all that…we love our winged, fanged nightwalkers…otherwise we wouldn’t write about them. (Did you ever believe otherwise?  Truly?)  Each of us in this very esoteric and close little circle (close and esoteric compared to other genres) has his own favorite type of Undead, and if the characteristics don’t exactly fit, why we’ll just use that good ol’ literary license and invent some which do.  I know one writer who allows her vamps to be able to utter the Holy Name without injury, and they actually have images in mirrors.  Another gave her nos the ability to conjure up an image in a mirror but only for a moment.  Some are repelled by garlic, others by various herbs and spices such as basil and oregano.  There days, the vampyre can be as varied as the humans on the planet, and it’s a very rare one indeed who hasn’t allowed himself to change with the times and avail himself—to some extent—of the technologies now present.  Hey, the vampire hunters are certainly taking advantage of the Internet, etc., so why shouldn’t the vampires, also?

Which conveniently segues into mention of my newest release, The Clan Andriescu.  I’ve done what I consider a pretty nervy thing with this novel…I’ve made myself a character in it.

In the foreward and also in the first chapter, readers will learn how a smart-ass adolescent named Tony-Paul happens, just by chance to meet three sightseeing tourists on a Savannsh beach.  They’re looking for something that doesn’t exist. He’s looking for…well, to tell the truth, at that stage of his life, TP didn’t know what he was looking for.  The tourists, however, did help him find a goal in his as yet undetermined life.

Things get off to a bumpy start, but get better as it goes along.

If the following blurb/excerpt piques our interest (Oui, I know how to both spell and use that word properly) here’s the BUY LINK: https://www.classactbooks.com/index.php/general-fiction/horror/the-clan-andriescu-pdf-3482013-05-14-03-37-13-detail

Marius, head of the Clan… Exiled for stealing one too many women from his prince…He can’t understand why the woman he loved in 1968 doesn’t want to renew their affair in 2013..

Valerius, the baby brother… ordered to marry, he selects the one girl who’s off limits because she’s human…all right to bite but not to wed…

Timon, the cousin… Being married to the most famous writer of vampire novels since Anne Rice can be fun, until she writes an exposé proving vampires are real…

When the sun sets on Savannah Beach, they meet a smart ass adolesdcent named Tony-Paul de Vissage…they entrust their life story to him…

“Back, foul fiend!” TP crossed one forefinger over the other, holding his hands in front of him.

“What the Hell are you doing?” The one called Val demanded, jumping back with a hiss.

“Back foul fiend?” Marius started laughing when TP spoke and now got himself under control. “I haven’t heard that phrase in at least a century. Where’d you dig up that?”

“I-I heard it in a Dracula movie the other night.” TP looked a little disappointed at their reaction.

“Dracula.” Marius looked disgruntled. “The best example of bad press, if ever there was. He should’ve sued his publicist.”

“If you’re through dissing Dracula, would you tell me…W-where am I?” wavered TP. “What have you done to me?”

“Done to you?” They looked at each other and back at him. “Nothing.”

“Okay.” Timon walked over to the fainting couch and slouched on it, legs crossed, hands behind his head. “I’ll bite.” He looked as if he’d like to do just that. “What are we? Exactly?”

“Vam…” He began to laugh, displaying those overlong eyeteeth. “You’ve got a sense of humor, kid, I’ll give you that.”