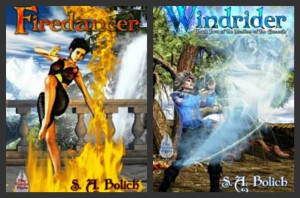 You know, it’s hard to be different when writing fantasy sometimes, which is why I am always amazed to look around and see the sheer imagination pouring out of new releases every day. Yet to many people, “fantasy” is still all about evil overlords, quests to save the world, magic McGuffins that must be collected and used, and magicians, swords, and all forms of sorcery. As a fantasy reader I love those things; as a fantasy writer, I want to go beyond them.

Firedancer and its sequels in my Masters of the Elements series are about as big a departure as I could make from the usual S&S tropes. I really, really wanted to leave the usual villains and plots behind and focus on something different. Hopefully, I achieved it in making my antagonist completely non-human: living fire. The elementals, Wind, Water, and Fire, are the children of the Earth Mother, but have long since grown beyond her direct control. Thus, she created the talented clans to hold them in check: Firedancers, Windriders, Water Clans, and Delvers–but the elementals are challenging that ancient magic, and no one knows why. Will it hold? Will the world end in fire or flood or destruction by the mad, uncontrollable Hag blowing all to ruin before her?

It is immensely fun doing something so different, trying to invent a world with none of the usual drivers of human conflict. There is no war here except against the elements. No swords, no armies, no ambitious dukes and kings. There are people trying to save their world and their loved ones, who differ greatly in the approach they think should be taken. Isn’t that like real life when crisis strikes? Everybody thinks they know the way to take control and get things back to normal, but how many times do they trip over each other, start fights, go down dead ends that make things worse, and generally end up worse off than before? I think people are the most fascinating things on earth, and when you throw in magic to complicate their relationships…! Ai yi yi, you get all sorts of interesting twists!

Still, despite their differences, the common desire among most people is to do good. In fantasy as in real life, somehow that thread becomes a lifeline, despite the fact that each one of the clans has the power to do massive damage (even unintentionally) to the rest. Imagine if a Windrider should make a mistake calling Wind in the presence of Fire. Nasty surprise for the Firedancer trying to control it! Yet there is room for love even across clans, equally unexpected, equally surprising, and very fun to explore, from passing quarrels to midnight passion.

Writing fantasy is the art of making the impossible real. Why not a fire creature that badly wants out of its prison, and why not folk trying to assimilate the fact that this time…it just might win? Who needs a cackling evil overlord when fire can eat your whole world?? Different villain, different battle, different magic…pure fantasy. And pure fun to write!

Read the first five chapters of Firedancer free at my website, https://www.sabolichbooks.com/Firedancer1-5.pdf. You can also buy it at Amazon, B&N, Smashwords, and nearly everywhere else books are sold, in ebook and print.