Marc Bilgrey, our guest blogger this week is kind enough to share the first two chapters of And Don’t Forget To Rescue The Princess. Simply visit his website at www.marcbilgrey.com. While you’re there, read an article he wrote for aspiring writers about how he wrote the novel. And check out some of his panel cartoons and comic strips.. He writes and draws them for magazines and books. Marc put up new ones every week.

AND DON’T FORGET TO BUY MY NOVEL! 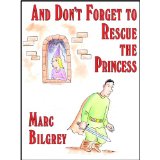 Do you worry about the economy, politics, crime, pollution? Do you sometimes feel like getting away from it all and having some laughs? Me too. That’s why I wrote my humorous fantasy novel, And Don’t Forget To Rescue The Princess. (Now available as an ebook from Amazon’s Kindle Store). I wanted to write a book I’d like to read. A laugh out loud funny fantasy with likable characters and a good story. The kind of book that you could escape into and have fun reading. What’s it about? I’m glad you asked. The novel is about Al Breen, an unemployed actor who wants to spend a quiet summer on Cape Cod writing a play. But his plans are interrupted by a talking cat who zaps him into a medieval world where Al is mistaken for a brave warrior (hey, it could happen to anyone.) Al is then forced by a king to go on a dangerous quest to rescue a beautiful princess. (Why don’t beautiful princesses have better security?) Al and his new partner, Nigel, an inexperienced knight, must battle a whole host of horrifying creatures, including evil trolls, a monstrous dragon, and other scary things too numerous to mention. All of this leads to a fast paced climactic conclusion that you’ll never forget. (Well, at least for an hour or two).

The book was originally published in hardcover, by Five Star,in 2005,and got good reviews, (Publisher’s Weekly, said, …”a series of amusing adventures involving trolls,dragons, elves, wizards and dental floss.” And William F. Nolan, author of Logan’s Run, said, “Laughs, thrills, suspense, and the product of a truly wild imagination. You’ll love the book.”) I’ve always loved fantasy and humor, so I thought, why not combine them? My serious fantasy, SF, and mystery short stories have appeared in numerous anthologies and magazines, but my background is in comedy writing. I’ve written for comedians, syndicated comic strips, and television.

You can listen to the audio from when Marc was a guest of Blog Host, Gail Z. Martin’s Ghost in the Machine podcast here:  https://www.audioacrobat.com/play/WyW99CjX