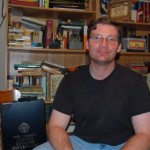 My newest book is A Tall Ship, a Star, and Plunder.  I’m the editor.  I am also the author of one of the stories therein.   It is titled The Serpent and the Dagger.  All the stories in that anthology are pirate stories, of course.  Mine is about a pirate captain who takes what he wants on the high seas by virtue of his magical control of a sea serpent.  The main character is one of the boarding party leaders who was originally kidnapped into piracy and deplores it.  He makes an attempt to rid the seas of his captain and the serpent.  The anthology is available at www.darkoakpress.com  It can be purchased in hardback, paperback, and on e-readers.

2. What inspired your new book or story?

The whole anthology was inspired by the thought of having another venue in which to sell stories.  I heard that there is an event called the Midsouth Pirate Fair which takes place in Memphis every September down at Mud Island.  I asked publisher Allan Gilbreath of Dark Oak why he didn’t do an anthology of pirate stories, because I’d like to submit a story to it and then go to the pirate fair.  He said he would if I’d edit it. The rest is history, except that the pirate fair didn’t take place as expected.  Alas.  The Serpent and the Dagger was inspired from I know not where.  I know I was at work when I thought of it, but beyond that, I just don’t remember.  Stories are funny that way.

3. How do you research your stories?

If a story requires research I start with any books I own on the subject.  After I have exhausted those, then I go to the internet and or the library.  For the pirate anthology, I did a fair amount of reading from books left over from a college course I took on Colonial Latin America, which, of course, included quite a bit about piracy in the Caribbean.  I reread parts of Pirates and Privateers of the Caribbean, and looked up pirate/nautical dictionaries online etc.  For fiction, the amount of research that actually makes it into stories varies greatly with the story.  After all the research on pirates, their history, and habits, and parts of ships, and naval warfare in the age in question, I think that only ten percent of it went into the story I wrote.  It’s fairly obvious that for some of the other authors in A Tall Ship, more of their research made it into the stories.

I try to avoid giving too much advice, just because I’m still pretty new myself.  The safest advice I can give is this: Don’t give up.  Always follow submission guidelines to the letter.  Read as much as you can.  Write as though it is your job.  Read a book on writing by a successful author, such as Stephen King’s On Writing, but don’t treat it like Gospel or hard and fast rules.  Be receptive to criticism.

There you have it.

Tagged as a Star, A Tall Ship, and Plunder, aspiring writer, Robert Krog, The Serpent and the Dagger