Zombies Needs Brains, LLC, the book publisher run by Joshua Palmatier and co-edited by Patricia Bray, is in the final hours for its DOUBLE anthology Kickstarter, Alien Artifacts and Were-. The Alien Artifacts part is pretty clear–stories about all the otherworldly stuff extraterrestrials carelessly leave behind where humans can get their hands on them, and the adventures/dangers that causes. Larry and I will be doing a story in our Iron & Blood universe, with the Department of Supernatural Investigation riding to the rescue once again. 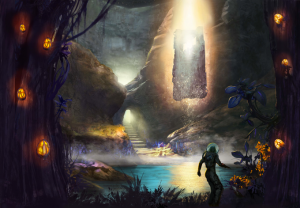 You can see more for yourselves and become a backer here:

One of those authors, Danielle Ackley-McPhail, gives us a sneak-peek of her work-in-progress for the Were- anthology!

An Excerpt from Weir Magic

Den Jeger wore the ivory shard sheathed at his hip like a dagger. His hand rested on the butt of the trophy as his thumb worried the raw edge on one side where the slice had not been clean, leaving a crescent-shaped scar behind. As his skin ran across the surface it kindled a faint burn that ran from his thumb tip up his arm toward his heart. He stilled in midstride on the busy sidewalk. Pedestrians dodged around him, some more carefully than others. He ignored the grumbling and out-and-out curses. He even ignored the shoulder slams and rough shoves. Years of practice made that possible. He closed his eyes as his breath stilled in his chest. He waited, but the sensation quickly faded. Over the course of his prolonged pursuit he had learned to pay attention to that sensation. More than once it had guided him to his prey.

Not this time, though. Once it was gone, it was gone. Growling, he spat into the gutter and continued on his way, shoving and grumbling with the best of those around him. More protests rose in his wake as he cut across the pedestrian flow to head down a side street. What he was looking for he wouldn’t find on the main concourse. Settling on the stoop of a nearby brownstone, Den drew out his phone and thumbed on the data. Within moments he opened a browser and called up the address for the nearest internet café. Fifteen minutes later he sat down at a beat-up monitor and keyboard tucked in the most private corner he could find at Java Web, a place so ubiquitous to others he had frequented across the continent that he felt almost at home.

First he scanned his google alerts for any telltales that might have popped up but nothing new surfaced about either Donovan Clooney or An Rógaire. From there he popped into the message boards and forums he regularly lurked through. He could have done all this on his phone, but he preferred to minimize his electronic footprint, much as he would the physical during a hunt. He surfed a few moments more, throwing in some random sites to confuse anyone who might be paying attention, then returned to some of his secondary information sources.

But he knew the monster was close, or another of its kind else the shard wouldn’t have reacted. He could not lose this opportunity. If he couldn’t pick up the trail Den would need to find a lure. Unfortunately, in this day and age, purity was nearly as difficult to track down as his prey which meant he had to step up his search. With a few clicks he cleared the computer’s temp files and browser histories and shoved away from the monitor, bumping past those waiting for his spot.

Once more he went out into the tumult of the city, hand resting on the shard. A faint burn ran from his thumb tip up his arm toward his heart and settled there. Den Jeger grinned fiercely, his stride lengthening as he took up the trail of a monster out of myth and legend, ready to avenge his brother’s death.

So what are you waiting for? Go out and reserve a copy for your own while there’s still time! In fact, there are some AWESOME reward levels left to grab, including Tuckerizations, and we’re almost to a new stretch goal that unlocks THREE extra ebooks! But HURRY–the Kickstarter ends at noon TODAY!