War of Shadows Is Now In Stores!

Blaine McFadden is back, and the bad guys are badder than ever! Broken magic. Power-hungry vampires. Evil mages. Battling warlords. War of Shadows is now in stores and online in trade paper and ebook—my darkest and grittiest adventure ever! 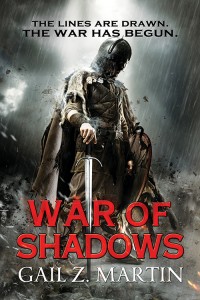 War of Shadows is Book 3 in Blaine McFadden’s Ascendant Kingdom’s Saga. Here’s the recap: Blaine “Mick” McFaden has scored a victory and restored the magic, but new threats rise from the wreckage of the kingdom of Donderath. While the magic remains brittle and undependable, warlords both mortal and undead vie for power, fighting for control of the ruined Continent. McFadden and his unlikely band of convict heroes must choose their allies wisely as renegade talishte take long- awaited vengeance and powerful mages seek to control Donderath’s next king. Blaine McFadden must protect those loyal to him against the coming storm, and find a way to bind magic to the will of mortals before it destroys him, because time is running out …

And since a picture says a thousand words, this is the book video

There are a few days left on the Goodreads giveaway

You can find an excerpt plus links to Amazon, Barnes & Noble, Books a Million, Chapter/Indigo, Waterstones and Kobo here: https://www.ascendantkingdoms.com/books/the-ascendant-kingdoms-saga/war-of-shadows/

What Reviewers are saying about War of Shadows

If you are an epic fantasy lover, then this is a series you should try!—Exploding Spaceship Reviews

“War of Shadows is a rousing adventure full of action, intrigue, danger, and suspense. It’s epic fantasy at its best, filled with vivid magic but grounded by real human emotion.”
—Aaron Rosenberg, author of the bestselling Adventures of DuckBob Spinowitz series

“This book kept me reading long past my bed time. As always, Gail Z. Martin delivers Epic Fantasy as it was meant to be read: gripping, action packed, and larger than life. A delight for any fan of the genre!”—Rachel Aaron, author of The Spirit Thief

“Which of these things are on your epic fantasy checklist: Intense action in the first few pages which then carries right through to the last? Vivid battle scenes? Characters that combine the best of classic archetypes with fresh new twists? Snappy dialogue? Exciting world building? If you’ve checked even half of these items, then you owe it to yourself to check out Gail Z. Martin’s War of Shadows. It’s heroic adventure at it’s rollicking finest.”
–Charles E. Gannon, author of Fire With Fire

“With a large cast of satisfying characters, Gail Z. Martin masterfully presents an epic struggle between the forces of life and the forces of death in a world of broken magic.”
—James Maxey, author of Greatshadow on War of Shadows