Telling Feminist Stories from a Male Point of View 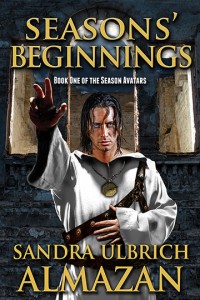 I enjoy writing stories about strong female characters. My characters aren’t the kind that shoot first and ask questions later (although they do defend themselves and their loved ones when necessary). They tend to be intelligent and strong-willed, with their own goals. However, they’re not always the main character. In Seasons’ Beginnings, my main character, Kron Evenhanded, is a man who must interact with many women over the course of the story. These women include magicians, both friendly and opposed to Kron; goddesses; and ordinary women. How can an author write a feminist story while working with a male protagonist and point-of-view character?

One way to make a story feminist is to have a variety of female characters in important roles. A woman is Kron’s chief antagonist, but there are also women supporting him. Some of these women are even more powerful than him (they are goddesses, after all). Other women appear in minor roles, such as a brewer who brings Kron up to date on what’s been happening in the city. Even minor characters like the brewer demonstrate that women can run businesses on their own. These women are not isolated, but interact with each other as well as Kron. There’s a pair of sisters, a pair of goddesses, and several women who are Avatars. (Avatars are men and women who are given specific types of magic by their patron deities.) True to the Bechdel test, these women talk about many things, not just men. Some of these women change over the course of the story, gaining new abilities or taking on different roles. Part of what drives this story is what the different women do with their power once they gain it.

What does Kron think about all of these women? Kron has worked with women—specifically, Salth, the woman who will become his chief enemy—at the Magic Institute where he was trained. Although he’s not fazed by women with power, he finds it difficult to adjust when Bella, the woman he loves, is chosen to become an Avatar. He knows she will be in danger from Salth, who has more power and knowledge than Bella does, so his instinct is to protect her constantly. Bella herself has always expected to become a traditional wife and mother, but when these dreams are thwarted, she must come to accept and embrace her new role.

If all of these women are so important, why did I choose to make Kron the central character of this story? His actions affect the other women and cause key events that drive not just this story, but the rest of the Season Avatars series. (In fact, I originally wrote Seasons’ Beginnings as a short story to set up the world and later decided to expand it into a novel.) When the Avatars receive their magic, Kron is the one who must train them and act as their leader before they face Salth. At the climax, Kron makes the most significant decisions and the deepest sacrifice.

I plan to have four more books in this series, each primarily told from the point of view of a different female character. Kron will continue to interact with the Avatars and even clash with them over who should be the leader. However, he will always respect them and treat all Avatars equally, no matter what their gender is. By showing gender equality in fiction, I hope to make it more common in real life.

Sandra Ulbrich Almazan started reading at the age of three and only stops when absolutely required to. Although she hasn’t been writing quite that long, she did compose a very simple play in German during middle school. Her science fiction novella Move Over Ms. L. (an early version of Lyon’s Legacy) earned an Honorable Mention in the 2001 UPC Science Fiction Awards, and her short story “A Reptile at the Reunion” was published in the anthology Firestorm of Dragons. Other published works by Sandra include Twinned Universes and several science fiction and fantasy short stories. She is a founding member of Broad Universe, which promotes science fiction, fantasy, and horror written by women. Her undergraduate degree is in molecular biology/English, and she has a Master of Technical and Scientific Communication degree. Her day job is in the laboratory of an enzyme company; she’s also been a technical writer and a part-time copyeditor for a local newspaper. Some of her other accomplishments are losing on Jeopardy! and taking a stuffed orca to three continents. She lives in the Chicago area with her husband, Eugene; and son, Alex. In her rare moments of free time, she enjoys crocheting, listening to classic rock (particularly the Beatles), and watching improv comedy.