New Lamps from Old: Transforming a Fairytale by Danielle Ackley-McPhail 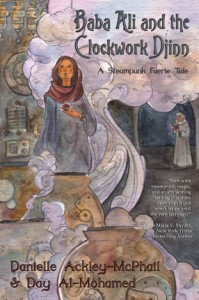 How do you transform a classic? How do you take a well-known tale and make it your own, while still capturing the essence of the original? I have never attempted this before. It is a daunting task, one that requires familiarity with the source material and lots and lots of research. I truly respect those who have made a name for themselves retelling multiple fairytales. I found it challenging retelling just one, and I had help!

I am talking about Baba Ali and the Clockwork Djinn, co-written with Day Al-Mohamed.

Originally this was to be a short story, written for the anthology Gaslight and Grimm: Steampunk Faerie Tales (Dark Quest Books, 2015), a retelling of Ali Baba and the Forty Thieves, but as anyone who has attempted (successfully or unsuccessfully) to retell a fairytale will tell you, there is no way to rewrite one short. There is so much content in those deceptively brief tales. Storytelling was much different back then, when most of these tales were spoken and not read. Maybe it is that people had to use their imaginations back then, so they needed less description, but in this age of show-don’t-tell it takes a lot more words to do justice to the classics.

Don’t get me wrong, this was a wonderful experience. If anything we had more content than we needed, and it was certainly fun to re-envision a story that was a childhood favorite of mine. It would be nice to explore some of these characters more deeply, though, and without even the loose restriction of keeping somewhat to the original.

You might ask why I selected a tale from 1001 Arabian Nights for the basis of a story meant for a collection of Grimm tales. There were several reasons. 1) An editor’s prerogative. 2) We wanted to explore more than just the European folk tales 3) Ali Baba being a favorite of mine from early childhood, I was familiar with it and saw a lot of potential for transforming it into a steampunk setting. (Little did I know that history itself would provide more than enough fodder to facilitate this transformation.)

Enough said on reason one.

On reason 2, one of my prime goals in bringing in other fairytale traditions was for variety. Different types of tales, different cultures, different backdrop all together. Now that can be very tricky all around. Fortunately, the story of Ali Baba is at least vaguely familiar to most people thanks to Disney. That left the cultural details, which I had to take great care with. My not-so-secret weapon: Day Al-Mohamed, a good friend and a great resource. At first she was just supposed to be my consultant but the details she provided were priceless. Then she showed me one of her own stories, Death’s Garden, to illustrate the Middle Eastern story-telling conventions and I was sold. I immediately asked her to co-write the story with me and it was one of the best decisions I could have made. Not only did she help me to remain culturally accurate and relevant, but our brainstorming sessions resulted in some truly inspired story developments that both built on the original tale and grew it out into lush dimensions, still maintaining the fairytale flavor, but transforming it with just the perfect amount of historical references and steampunk inventiveness to breath life into our creation. By layering technological innovation over cultural convention our tale builds on the foundation of a civilization with millennia of history not just as a people, but as engineers, making it the perfect canvas for our tale.

One of the first things we did was search for our historical references. Like the perfect application of fine spice, historic facts about Charles Babbage, Victorian England, the Persian Empire and a Middle Eastern engineering text dating back to the year 1206 added depth to the flavor of our tale. We referenced photographs and maps from the period as well as drawing on botanical and geographical features applicable to the region to lend authenticity to our characters and setting.

How well did we do? You’ll have to determine that for yourself. I will say, though, that with all of these resources we were able to create a universe others seem to want to explore every much as we do ourselves.

Click here to listen to a special audio except from Baba Ali and the Clockwork Djinn on our sister site.