BLOODSUCKERS – A Vampire Runs for President 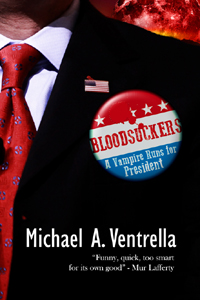 by Michael A Ventrella

“Politics, intrigue and vampires—a match made in Washington, DC. A bloody good political thriller that sucks you in from the start and gets its teeth into your imagination.”

BLOODSUCKERS is a political thriller — with vampires.

Norman Mark is a politician with skeletons in his closet (literally).  He’s a liberal Democrat who is constantly attacked by the tea party extremists who say he’s a socialist and an atheist and wasn’t born in America — and a vampire!  Everyone laughs at the crazies but it turns out they’re right about all of that.

Disgraced reporter Steven Edwards supports Mark completely.  When Mark is shot at a campaign rally, Steve looks to his acquaintance who drops the smoking rifle, smiles, turns into a bat, and flies away – leaving Steve as the prime suspect.  He is rescued by the vampire believers (Jon Stewart calls them “Batties”) and he goes into hiding.  The only way he can prove his innocence is by proving to the world that vampires actually do exist while  constantly on the run from the bloodsuckers and the FBI.

Steve learns that vampires have been controlling things behind the scenes for thousands of years, accumulating wealth and influence.  Many vampires don’t like the idea that one of their own is running for President and they’re trying to stop him, worried that he will expose their existence.  Others support Mark. Many of them want Steve dead.

BLOODSUCKERS is not a traditional vampire novel but more a political conspiracy thriller with humor.  Oh sure, people turn into bats and drink blood, but as I said, this is political.

Readers of my novels and short stories know to expect plot twists and turns and surprises along the way.  Part of the fun in writing it is leaving the clues so that when the twists happen they are unexpected but logical.  I also enjoyed working in real journalists like Brian Williams, Rachel Maddow, and Stephen Colbert.  OK, mostly real.

There’s a lot more information on my web page, along with links to other reviews and the first few chapters (so you can get hooked).  You can get the ebook, nook, or kindle for as little as $6 or so.