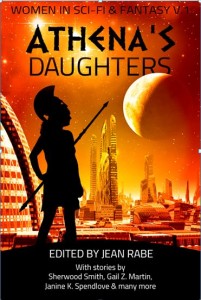 I’ve partnered with Silence in the Library Publishing, Kickstarter, and a host of renowned authors including names like Mary Robinette Kowal, Jean Rabe, Sherwood Smith, and many others in a new Kickstarter project titled Athena’s Daughters.

My story, “Retribution”, is set in my Deadly Curiosities universe, in modern-day Charleston, SC. It’s the same characters and setting as my “Buttons” adventure, and as the upcoming urban fantasy novel, “Deadly Curiosities” (Solaris Books, 2014)

Athena’s Daughters is a collection of short fiction from some of the best female science fiction and fantasy authors in the industry. This anthology features stories written by women about women. I’m also incredibly excited to have an introduction to the anthology by retired astronaut and Space Shuttle Commander Pam Melroy.

The publisher, Silence in the Library, believes strongly in the concept of bringing the artistry back to publishing. To that end, every anthology they produce features illustrations for each and every story. Additionally, my fellow authors and I, and the staff at Silence in the Library Publishing believe that any good project should contribute something to improving the human community. In keeping with that goal, a portion of every book sold will go to RAINN. RAINN (Rape, Abuse & Incest National Network) is the nation’s largest anti-sexual violence organization. RAINN created and operates the National Sexual Assault Hotline in partnership with more than 1,100 local rape crisis centers across the country and operates the DoD Safe Helpline for the Department of Defense. RAINN also carries out programs to prevent sexual violence, help victims and ensure that rapists are brought to justice.

By funding Athena’s Daughters at any level, you help bring this project to life. And for supports who fund starting at the $5 level, you get awesome thank-you gifts from the authors. Help us reach our stretch goals, and you could win free books, ebooks, audiobooks, art, and more. You might even win the chance to be written into one of the stories!

Watch the cool video Janine Spendlove made to tell you all about it:    Athena’s Daughters–You can make this live!