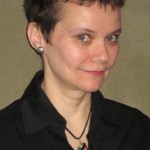 One of joys of reading science fiction and fantasy is its challenge to our imagination. We are offered new worlds and beings and expected to accept them as real.

But before a reader gets a chance to wrap her mind around fantastical inventions, a writer must invent them. That can be harder than it sounds. The trick is not the inventiveness; most authors who choose to write speculative fiction have imagination in spades. The trick is viability and consistency.

Consider a fantasy creature we’re all familiar with: a dragon. As the author describes this dragon, there are a lot of factors to consider: What color is it? Is it the same color all over? Does its color change as it moves? What texture is its skin (scaly? spiky in some parts?)? How large is it, compared to other characters or objects around it? Is it a young, spritely dragon, or an old, lumbering one? How wide must its wingspan be for it to reasonably be expected to fly?

And then there is its effects on its surroundings: What happens to the ground when it lands or takes off? How do the trees move when it flies through or over them? What gets scorched when it breathes fire? If someone rides on its back (as seems to happen with remarkable frequency), how does that person hang on? How does the dragon react to having a rider?

Such issues become magnified when an author has invented a completely new and unfamiliar creature. My favorite example is the trinity Odeen, Dua, and Tritt in Isaac Asimov’s The Gods Themselves. Asimov seemed determined to make beings that were as far from human experience as he could imagine, so their very physical presence is foreign and is intermixed with unique psychological features. These creatures are rather ghostlike, feed on moonlight, and to show emotion and experience they alter their width and density. And, rather than two sexes in this species, there are three sets of emotional function. It’s complicated and fascinating, and completely believable.

No surprise that the great and powerful Asimov set himself such a hurdle. For most of us ordinary mortal writers, however, it’s the physical nature of invented creatures that’s the primary challenge. For example, one of my main characters in The Webrid Chronicles is named Zatell. Her body is a single round section surrounded by about thirty small limbs that serve as both hands and feet. When she “walks” (and I try not to use that word too much with her), she’s really rolling or cartwheeling.

Every time Zatell performs any physical act, I have to think very hard how she could actually accomplish it. Getting up onto a chair is different for her than it is for a biped species. On the other hand, she can do many things that others can’t, like hold several things at once while also eating and writing! The biggest issue in such cases is consistency. Notes like “Can she actually do that?” from sharp beta readers and editors are invaluable and always make me slap my forehead.

It can be slow, detailed work to rein in the imagination to make it viable to a reader. But the chance to captivate the reader is what a writer lives for, so it’s absolutely worth the effort. 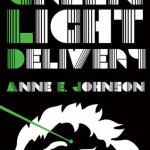 Green Light Delivery, Book 1 of The Webrid Chronicles, is a humorous, noir-inspired science fiction adventure. Read the first 24 pages of for free here.

Book 2, Blue Diamond Delivery, is scheduled for release by Candlemark & Gleam in June of 2013.

Purchase Green Light Delivery from the publisher, on Amazon, on BN.com, and elsewhere.

You can learn more about Anne E. Johnson at her website.