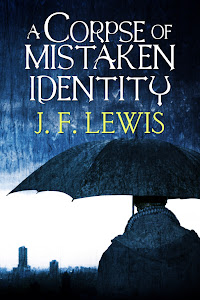 One of the best parts about working in a world of one's own creation is the ability to populate it with cool new powers and abilities. Not just monsters and magic, but the rules behind them, the internal consistency which lets readers know not just what your characters can and cannot do, but also serves to set your creations apart.

Take Atticus, the ancient (and awesome) Druid, from Kevin Hearne's Iron Druid series. He's powerful as long as he can make contact with nature, with the soil, but trap him in the middle of the street over lifeless pavement and he's in trouble. True he has ways to store power and there are trick up his sleeve, but the countdown to powerlessness has begun. As readers we know it and the tension is immediate.

Magic has to have defined costs and limitations, a balance which lets the mystical make sense… makes it ring true. It must seem like a tool, not a cheat. When I was writing A CORPSE OF MISTAKEN IDENTITY, I knew that Zaomancy would need to fit those same rules. My main character, Richard, would literally be bringing the dead back to life and breathing the breath of life (zao, if we accept Richard's choice of Latin) into inanimate objects. For that to work, there needed to be a price… a balancer and a set of rules.

In the initial draft, that balance took a while to figure out and fine tune. I explored a fair number of options, but the one I kept coming back to was age. Each zaomancer only has their own life's breath with which to play and using their powers ages them, sometimes slowly, but always in direct proportion to how much death they are trying to overcome. It simple, the price of life is… life itself, just not all at once or the heroes would be pretty short-lived.

Once you have the rules, the framework, then you have to combine them with cool plots and fun characters. A Zaomancer, for instance, who has been lied to about the corpse he's about to bring back to life, a newly turned vampire who has just realized she can't have chocolate anymore, or maybe even a necromancer who is the hero rather than the villain (Hi, Gail!). The sky is the limit, but make them your own and your reader's will love them.