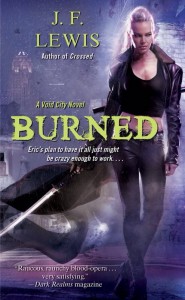 In most good stories there are protagonists and antagonists (often but not always, a main one of each), but in some of my favorite tales, it’s hard to say whether or not the characters filling those two roles are actually a hero or a villain. Life is not always black and white when it comes to depictions of good or evil. As the saying goes: Sometime good people bad do bad things.

Having said that, one of my favorite moments in many movies is when the reluctant hero finally gets off the fence and comes out swinging. He has a plan. He may not have everything he needs to carry it out, but you can see it in his eyes that he won’t give up.

And in a way, that’s what BURNED, the next book in my Void City series is about. For three books we’ve seen my lead protagonist, Eric Courtney, the bad ass vampire with a terrible memory and a worse temper, try to get through life without really dealing with the world around him. After the end of CROSSED, however, he finally has hope and hope can be a very dangerous thing.

What does that have to do with the title of this blog post?

When one character has a “sea change” moment, or in Eric’s case, a reawakening of sorts of the man he used to be, it changes the dynamics of those around him. Almost everyone can think of a moment when a friend or relative changed in some way. Sometimes something as simple as a haircut or color can change the way the world views a person. At times the readjustment period is short. Other times, depending on the change, the adjustment can take a long time or even fundamentally alter the relationship forever. If your the one undergoing the change, the ones you love can suddenly seem like the antagonists in your own personal story.

In Burned, Eric’s daughter Greta is cast in the role of antagonist for the first time. She loves her “Dad”, but doesn’t understand why he is acting strangely or what he is hiding from her (and teh other vampires in Void City). I won’t spill the beans on his secret, but Burned was incredibly fun to write because in this one: Eric has a secret to keep, a plan to win it all, and everything to lose. And the person most likely to blow all of his ans to hell and back is one of the people he loves the most.