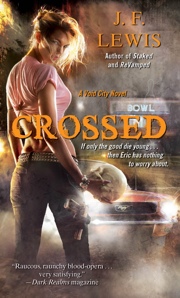 A year ago (or more) my desktop PC died. When it did, I realized that I didn’t really need one anymore. I wrote mostly on my laptop and used the PC mainly as a synch station for my iPod and long term email storage. When it died, I already had all of my writing files backed up to the laptop. No worries.

In the intervening period, I picked up an iPad, largely because I hoped it would served as a portable writing solution. The battery life was far better than my laptop. It was lighter, easier to get out and type on while waiting in line or walking around, and though I still needed to use my laptop to review edited versions of my novels and to synch my iPad, the only things I actually tended to write on it were blog posts. Blog posts which sort of vanished into the ether when it died.

Previously, the death of a computer would have caused a huge surge of activity, running about checking floppies… or in later incarnations CD-ROMs, then DVD-ROMs, but in the new era of technology in which I find myself, it involved a sigh. Then I checked my Dropbox to make sure it had the most recent versions of everything and went about the business of trying to keep up my daily word count so that I can turn in the fourth Void City book on time.

What does this have to do with advice for aspiring writers, you may ask?

Don’t lose your work. Dropbox is what I use (you get 2 gigs of storage for free and that is plenty of room for a directory filled with mostly documents… and if you want a referral link https://db.tt/eZw1lIi there ya go.), but it’s not the only one out there. Just use something. Do not lose your work. I understand that may sound strange coming from a writer who used to delete his own novels, but it’s still sound advice.

So… because of Dropbox, all I lost were emails and some blog posts. What’s the worst data loss you’ve experienced?