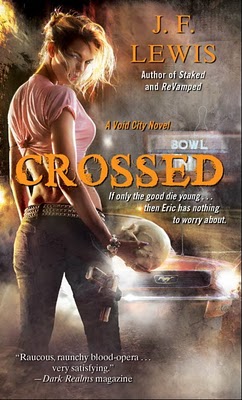 Run for your lives!  It’s the return of the Little Green Notes!  Gah!

(NOTE: If you’re just joining us, the notes in question are green Post-it notes that have been stuck to my office wall ever since I received the revision letter for STAKED (then called WELCOME TO THE VOID (and later BITE ME (but eventually STAKED))) and I began working on what would sort-of- kind-of-almost-be the draft that was eventually published.)

Now, there’s nothing wrong with a certain amount of meandering.  In the Void City books, Eric meanders all over the place, telling an anecdote here or there, but the key (as much as I can tell… and as with all my advice, your mileage may seriously vary) is to make sure you don’t go too far off the reservation without a reason.  Case in point:  El Segundo.

Eric went there, but what happened is a story I’ve yet to tell.  The events, however, are a part of Eric’s back story, so it’s appropriate to fill in the details as they apply to his current narrative.  But if I wanted to tell the whole story then I’d write a book called EL SEGUNDO (or more likely a one word past tense title so that it matched the other books…(UNSUNG, maybe?)) and spill the beans about the whole sordid affair.  And some of my readers would probably dig that.  But there something important is gained by both me and the reader when I fail to tell that story first:  It gives the characters a past.  They seem like they’ve already had adventures together and that “history” lends them an air of reality.  In addition, readers who enjoy digging out every little hidden piece of the Void City universe have something to put together, a puzzle to solve.

In STAKED, all anyone knew about Eric’s time in El Segundo was that it happened during the 1980’s, Eric met Talbot (his enigmatic shapeshifting Mouser pal), Eric was dating Irene at the time, demons were involved, Eric caught fire a lot, and something very very big went down.  In ReVAMPED, more info was doled out.  That “Big Thing That Went Down” was the end of the world.  Eric stopped it.  Not because he’s a hero (because he isn’t), but because he was there.   By the end of CROSSED, readers have enough to put even bigger chunks of the story together… Talbot broke a huge taboo of his people: “Knowledge gleaned from the akasha is not for those who cannot see its light” and was exiled for it, and…

It’s fun to know, but only parts of it directly impacted the three novels.  In fact, I could have gone back farther than that.  Eric fought in World War II and Korea while he was still alive.  In fact, he left the seminary to enlist, because he felt it was the right thing to do.  A novel about a would-be priest becoming a soldier, losing his faith trough the perils of war and being put back together again by the woman who loved him?  That would have been a whole other novel, set well before Eric was even a vampire.  In fact, if we wanted to REALLY start at the beginning, back in France there was this order of knights and this very powerful vampire, oh, but wait, before that there was this other vampire named Percival, oh, but before he was a vampire he was a wizard.  But, wait, no.  Before THAT, there were a brother and sister who…

Yeah.  The story has to start somewhere.  And when you stop telling the story and start telling another one you’re meandering.  Like I just did.  Well, unless you aren’t.  😉